As you may have noticed, I have a baby chick. I have not written about them or shown them until now, but I have two fully grown hens in the yard as well.

I live in an old line suburb of Detroit. The neighborhood, affectionately nicknamed the “cabbage patch,” is predominantly made up of two-story flat rentals, small apartment buildings and long, skinny “shotgun” style single-family homes. It is, effectively, early 20th century inner city Detroit living. We have a diverse array of neighbors and see each other a lot due to the tightness of our homes and yards. This may seem like unnecessary information, but I feel it is good background, as I believe the closeness of the community has helped greatly in answering the most common question: “How the heck do you have those birds in the city?” Simply put, everyone in the neighborhood loves them and I have never had a complaint.

Anyhow, one day last year, my friend, the totally deranged bird breeder, dropped these two off. No, really, he calls me and says “I have these birds and I’m on my way, see you soon!” (I wrote a short narrative on the whole incident and will post it someday.)

They are of a breed named Dominique. Also known as Pilgrim Fowl, this breed is considered the oldest American chicken, likely descending from fowl brought to this continent by, you guessed it, the Pilgrims. At one time, they were uncommon enough to be listed as “endangered” but have recently enjoyed a surge in popularity and numbers.

This morning, I am working toward acclimation, that is, getting the adult birds to accept Amelia, the young RedJunglefowl, in “their” yard. The Red Junglefowl is a different breed (and arguably a different species) from both the Dominique and modern chickens. 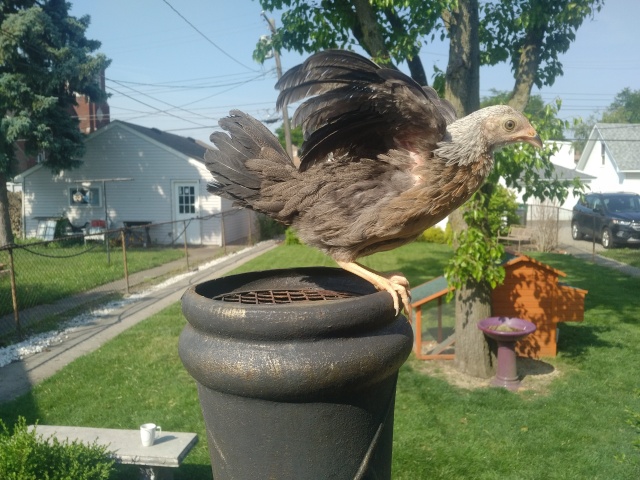 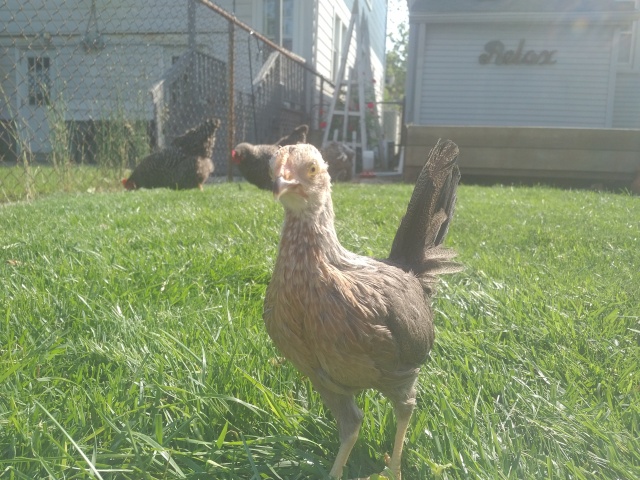 So far so good, they are mostly ignoring her, which is preferable to the first time I tried introducing them, where Alberta pecked at her. This is not an easy process, taking loads of time and patience. I am confident, though, the result will be a beautiful, healthy mixed flock.

Thanks for reading! More bird updates are on the way!